The campaigns of the LSSAH.

back to PART I: Designations, Commanders, Creation, Organization, Particularities and the End of LSSAH

The motorized infantry regiment ‘Leibstandarte Adolf Hitler’ participated in the invasion of the Rhineland, the ‘Anschluss of Austria’ and the occupation of the Sudetenland and then Czechoslovakia.
The first hardness test came then in September 1939 in the Polish campaign within the Wehrmacht Panzerdivision Kempf. The Regiment fought well in Lodz, Warsaw, and Modlin, but lost more than 400 men in repeated attacks by Polish infantry and cavalry, often leading to close combat.

During the Western campaign, the Leibstandarte showed itself in excellent condition and crossed the Jizera near Zutphen and moved forward 75 km (45 miles) in a single day. For the first time, the extraordinary fighting spirit of the unit was shown, which was to become its trademark. However, som members are also suspected of having murdered 80 British PoWs on 28 May 1940 at Wormhout.
Recognizing the excellent fighting in the West, the regiment received the ‘Fuehrerstandarte’, Hitler‘s personal banner.

In April 1941 the Leibstandarte took part in the Balkans campaign and invaded Greece. Highlights were the conquest and cleansing of the Klidi- and Klissura pass, as well as the crossing of the Gulf of Corinth to Patras.

With the beginning of Operation Barbarossa, the Leibstandarte was subjected to its largest test so far. Until December 1941 (as a Brigade) as an element III Pz.Kps. / Pz.Gr.1, attacking in the area east of Uman to Nikolayev, Sea of ​​Azov; across the river Mius to Rostov (late November 1941) – retreat westward, area to Taganrog.
December 1941 until May 1942 defense on the Mius.
June and August attack on Rostov-on-Don.
In late July as OKH Reserve, area of Stalino. Beginning of refreshment and reclassification (creation of Pz.Jäger-Abt. 1 LSSAH as tank Abteilung with three batteries on self-propelled guns). February 1943 transport to Army Group ‘Don’ in southern Russia, area around PoltavaDefensece between Oskol / Donetz and area east of Kharkov, against Russian breakthrough from area to Voronezh – east of Starobelsk through the area south of until Charkow and area east and north of Stalino. Retreating from Kharkov to the area of Merefa-Krasnodar, March 1943.
Counterattack from the area around Krasnodar-Merefa to the North/Northeast to Kharkov-Belgorod. Retaking of Kharkov.

Refreshing around Kharkov, May and June 1943. Pz.Rgt. 1 LSSAH with Staff of II Abteilung reinforced to about 100 Panzer III and Panzer IV. III (armoured) / SS-Panzer-Grenadier Regiment 2 LSSAH equipped with new APC’s and heavy weapons (self-propelled). I/Panzer Regiment was transferred to Germany in June (for equipment with Panzer V Panther).
From July 2 to 20, 1943 in action during the ‘citadel offensive’ at Kursk. In late July assembled near Kharkov – transport together with SS-Panzer Corps to Italy.

Here military occupation of northern Italy – ‘Clean-up’ of partisans occupied areas in Istria.
Occupation of Milan. In October 1943 on the way back to the Eastern Front. Quick refresh at Berlin – including of I/SS-Pz.Rgt.1 (with new Panther tanks).

Assembling in area Kazatin-Swira until November 7. Counterattack on Fastow. Then counter strike in the area north of Fastow-Brusilov-Zhitomir; attacks from 14 November in direction Korostyschewl and Brusilov; encirclement of strong enemy forces south and east of Radomysl end of November.

December 6 strike from area north of Zhitomir towards Radomysl-Makarov near Kiev, to Malin on river Teterev; recapture of Radomysl (December 15). Counterattack in area southeast of Korosten and around Meleni until December 22.
Defense, counterattacks in area Berdychiv-Kazatin until mid-January 1944Defensece in the area around Yampol – southwest Shepetovka.
March to Uman. Counterattack, southeast from area. Uman/Risino on Winograd-Lysianka, on Gn.-Tikits to relieve the trapped troops at the Korsun pocket.
4-26 February 1944: march to area southwest of TarnopolDefensece in the area around Yampol, breaking out of encirclement around Yampol, to the south in the ‘pocket northwest of Kamenenz-Poldolsk’. Breakout to the west, past the Strypa-Seret-section, until mid-April.
Out of the front line and reserve Army Group ‘Northern Ukraine’ until the end of April (around the area west of Lviv). 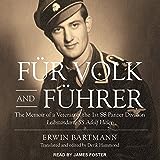 Fur Volk and Fuhrer: The Memoir of a Veteran of the 1st SS Panzer Division Leibstandarte SS Adolf Hitler

$21.83 (as of July 9, 2020 - More infoProduct prices and availability are accurate as of the date/time indicated and are subject to change. Any price and availability information displayed on [relevant Amazon Site(s), as applicable] at the time of purchase will apply to the purchase of this product.)

$29.95 $22.00 (as of July 9, 2020 - More infoProduct prices and availability are accurate as of the date/time indicated and are subject to change. Any price and availability information displayed on [relevant Amazon Site(s), as applicable] at the time of purchase will apply to the purchase of this product.)

$6.09 $9.48 (as of July 9, 2020 - More infoProduct prices and availability are accurate as of the date/time indicated and are subject to change. Any price and availability information displayed on [relevant Amazon Site(s), as applicable] at the time of purchase will apply to the purchase of this product.)

Action in Normandy: counterattacks; defense in the area south of Caen and east of river Orne, in the center of defense battles close south of Caen (mid-July 1944): on 17 July LSSAH knocked out 100 enemy tanks at Cagny-Frenouville. Successful defense against attempt to break through by the 2nd (British) Army at Caen (Operation ‘Goodwood’) until July 20.
After Allied break-through assault ‘Operation Cobra’ at St. Lo-Periers and their breakthrough to Avranches (July 30): Counterattack from area northeast Mortain against the Allied hose to Avranches. LSSAH, however, was nailed there by fighter-bomber attacks. Defense from August 8, retreat and defense in forming ‘Pocket of Falaise’. Outbreak of the rest of the battle group via Chambois-Trun. Retreat to river Seine north of Paris. River crossing at Elbeuf-Rouen. Retreat of the remaining battle group LSSAH through northern France and Belgium behind the river Meuse at Charleville.
From September 15 released for replenishment in Germany; except main body of SS-Sturmgesch.Abt.1 (assault guns) fought from August to December in Kurland (Baltic provinces).

Battle of the Bulge: Attacks and defenses from December 16 during the ‘Ardennes offensive’. Attack on Honsfeld-Büllingen-Stavelot to Stormont/Gleize, 30 km east of Huy, on the Meuse; defense eastwards of Bastogne; Retreat in the Eifel (until mid-January 1945). Short, replenishment behind the front line.

From the end of January rail transport to western Hungary to Army Group South (in the area north of the lake Balaton west of Polgardi; around Stuhlweissenburg-Morl in southern Vertes mountains south of Esztergom; area east of Neuhäusl – northwest Esztergom, at Gran and Danube until February 14, 1945. Attack from February 17 via Kis-Ujfalu-Köbölkút; Gywa-Muszla in direction of Parkanyl-Ebed. Cleansing of Russian ‘Gran bridgehead’ by strike to Kemend-Beny until 25 February, 1945. There after march into the area Papa-Varoslöd; north of Polgardi. Assembling and replenishing for strike to the Danube close to Dunaföldvar.
Successful attack to Sio Canal and winning a bridgehead over the canal at Simontornya-Ozora; Defense to Simontornya until March 17. After breakthrough of the 2nd Ukrainian Front of Tolbuchin between Mor and south-west of Esztergom, Ri. Komarno, Danube and Papa/Kisber, LSSAH was released.
March to the north, area around Inota-Varpalota, west of Stuhlweissenburg (March 18-19). Counterattacks in area of Mor-Kisber. Then retreating on the line around Veszprem-Varoslöd on March 22.
Retreat in the southern part of the Bakony Forest, about Urkud north of Deveczer up to the area south of Papa (25 March); Defense around, retreat to the Marcali-Raab channel south of Marc Alto. Defense around Czelldömölk against Russian flanking attacks on both sides (26-27 March). Outbreak to the northwest to Újkér-Felsösag – around Gyorö – south of Kapuvar. Retreat to the north, area west of Sopron.
Retreat through the area around Wiener Neustadt through the Vienna Woods; Defence in the Vienna Woods in the area west of St Pölten from 10 April – 5 May, 1945.

back to PART I: Designations, Commanders, Creation, Organization, Particularities and the End of LSSAH

(680)
$9.25
Factory sealed DVD
(as of July 10, 2020 - More infoProduct prices and availability are accurate as of the date/time indicated and are subject to change. Any price and availability information displayed on [relevant Amazon Site(s), as applicable] at the time of purchase will apply to the purchase of this product.)

(177)
$9.96 (as of July 10, 2020 - More infoProduct prices and availability are accurate as of the date/time indicated and are subject to change. Any price and availability information displayed on [relevant Amazon Site(s), as applicable] at the time of purchase will apply to the purchase of this product.)

Helmet for My Pillow: From Parris Island to the Pacific: A Young Marine's Stirring Account of Combat in World War II

(2006)
(as of July 10, 2020 - More infoProduct prices and availability are accurate as of the date/time indicated and are subject to change. Any price and availability information displayed on [relevant Amazon Site(s), as applicable] at the time of purchase will apply to the purchase of this product.)
Tags: germany, ss
Next PostRead more articles

9th SS Hohenstaufen from Arnhem to the end